Why are my leaves turning yellow by Dr Laura Jenkins 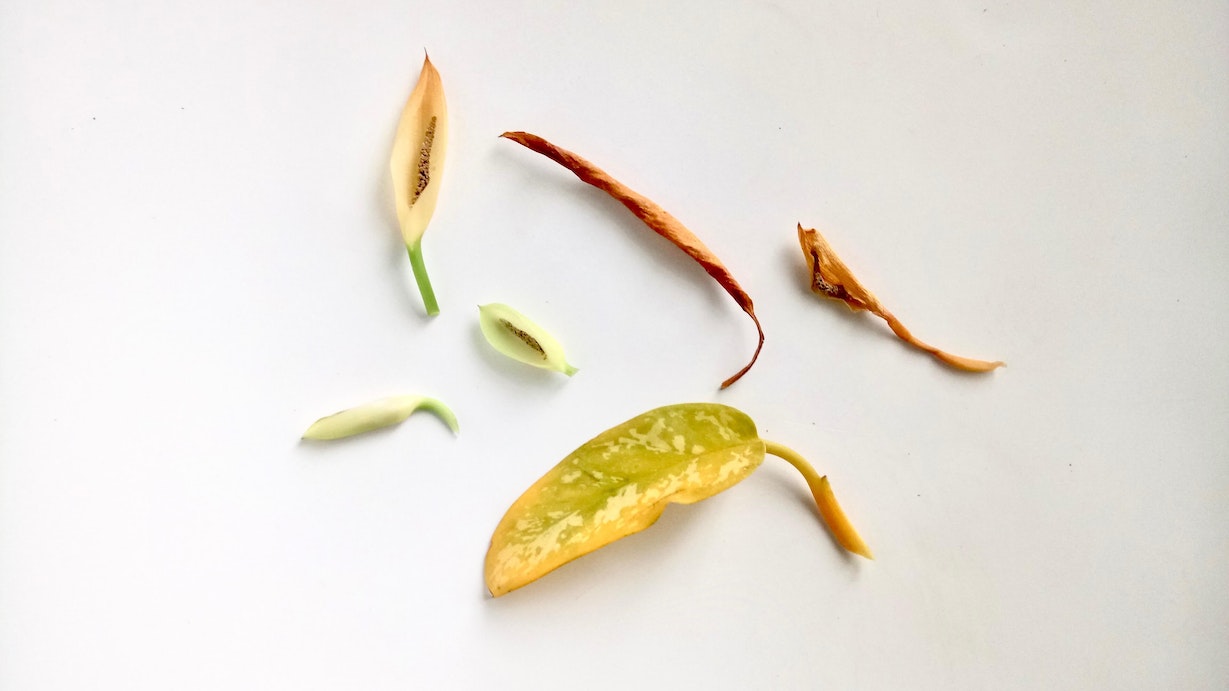 A question, or rather an exclamation, I hear quite a bit in the plant shop is ‘my plant has leaves that are turning yellow, help! What does this mean?!’ So I thought I’d put some of the possible causes in a little post to help as it’s often a process of elimination to determine the root of the problem.

First things first, it’s important to note that it’s not always a sign of anything majorly wrong; yellowing leaves are part of the natural life cycle and it is not uncommon for older plants to shed the odd leaf on occasion. For me, the plants that do this the most are my Ficus family, though my pothos and philodendron leaves also have a tendency to go all shades of golden ochre with age (as in these photos… pretty, hey?) This can sometimes coincide with a drop in temperature too. 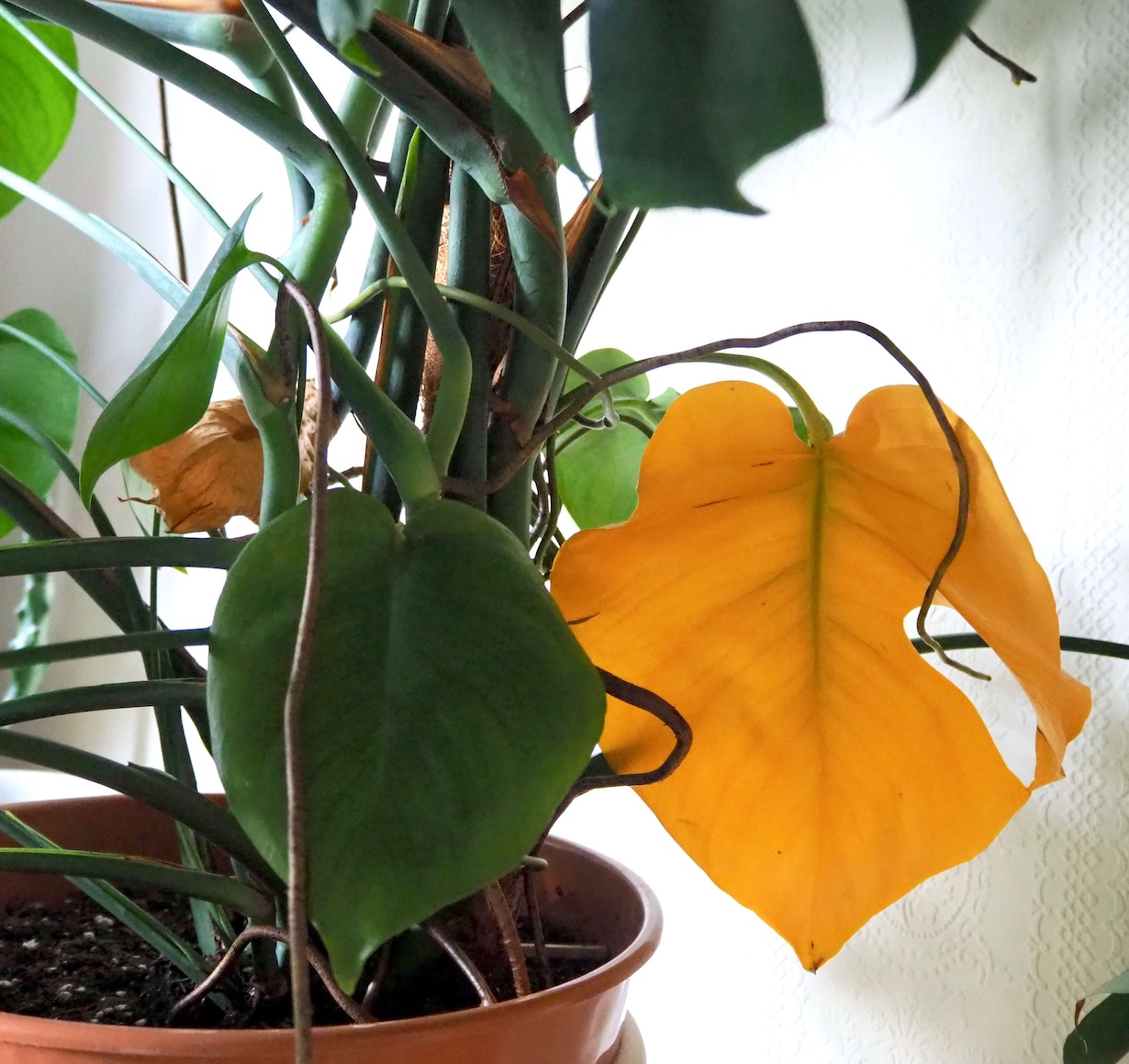 The most common reason to address is prolonged overwatering – yes, I know, lovingly tending to your plants can be relaxing… but everything in moderation! (put those watering cans down)

The concept of watering is something that takes a bit of time to understand if you are a new plant parent, particularly if you have a couple of plants with different needs; foliage plants, cacti and succulents of course all require different care and can be a bit confusing. Instead of thinking ‘I’ll water my plants EVERY Friday on my day off‘, use this time to check the soil first. Stick your finger in about two inches and if there is still damp, hold off watering and check again in a few days. This is a bit of a general rule for foliage plants; there are exceptions of course, but it’s better to be cautious with watering until you get to know your plant a little more.

Multiple leaves turning yellow and dropping in close succession might be the plant telling you it needs less water. Remember that over winter, you’ll need to reduce watering quite a lot with some plants, especially ones like Ficus that can go dormant in lower temps. There’s more info about this (and more in depth watering advice) over on a post I wrote here: HPH houseplant winter care guide.

A bit of a (seeming) contradiction to the point above about overwatering (and less likely), but if the leaves at the very bottom of the plant are yellow or pale in colour and have crispy patches of brown on them, underwatering could be the cause. This is usually coupled with stunted new growth too, so keep a note in your diary if you think you need a reminder to water your plants a little more often! 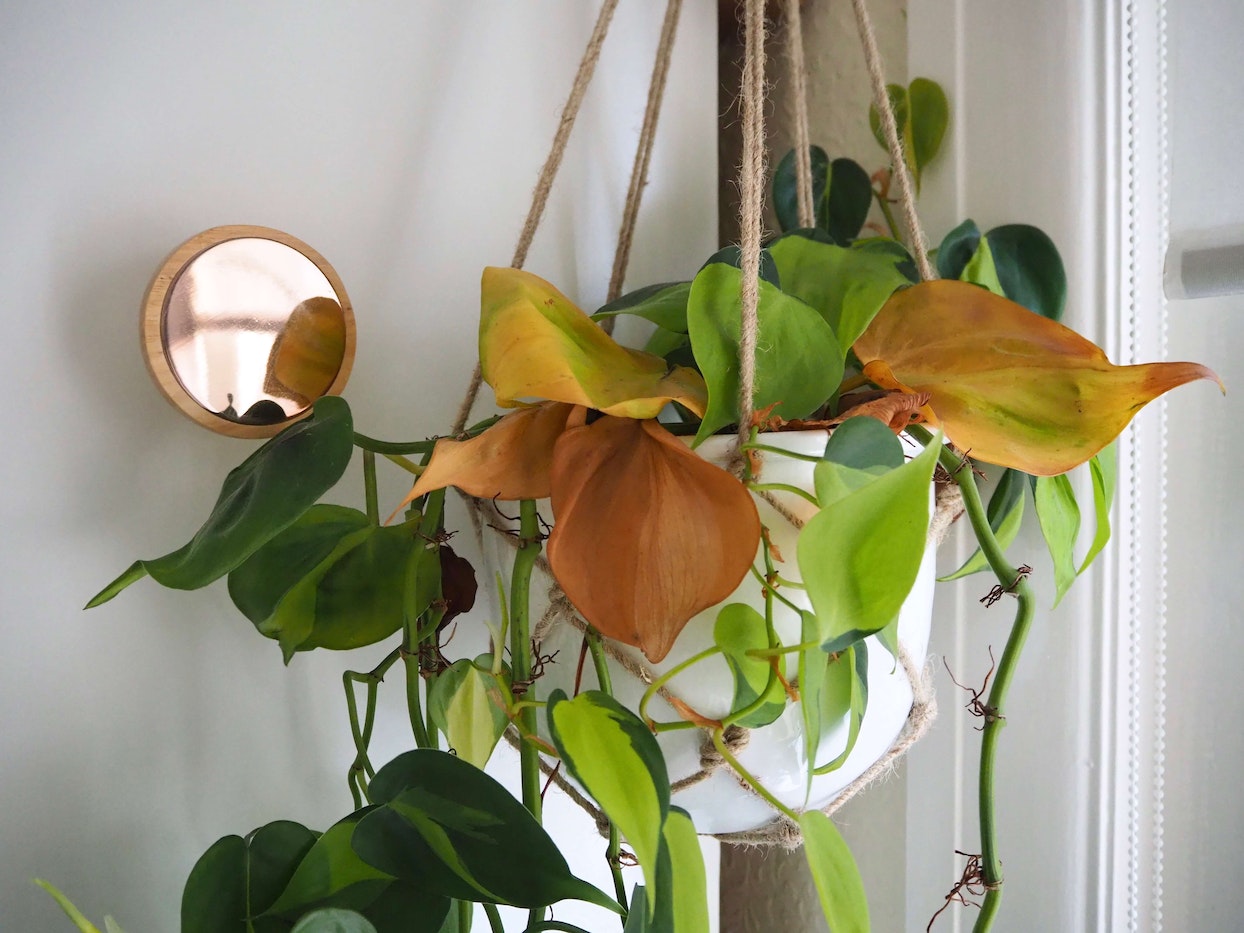 When my plants are actively growing (March – October) I like to feed my houseplants approximately twice a month (or every other watering). This keeps them strong and healthy, there’s a post about how to feed your plants here. However, if leaves are not drooping but are yellow and ‘firmer’, this might reveal that the plant is deprived of nutrients and needs some fertilising. 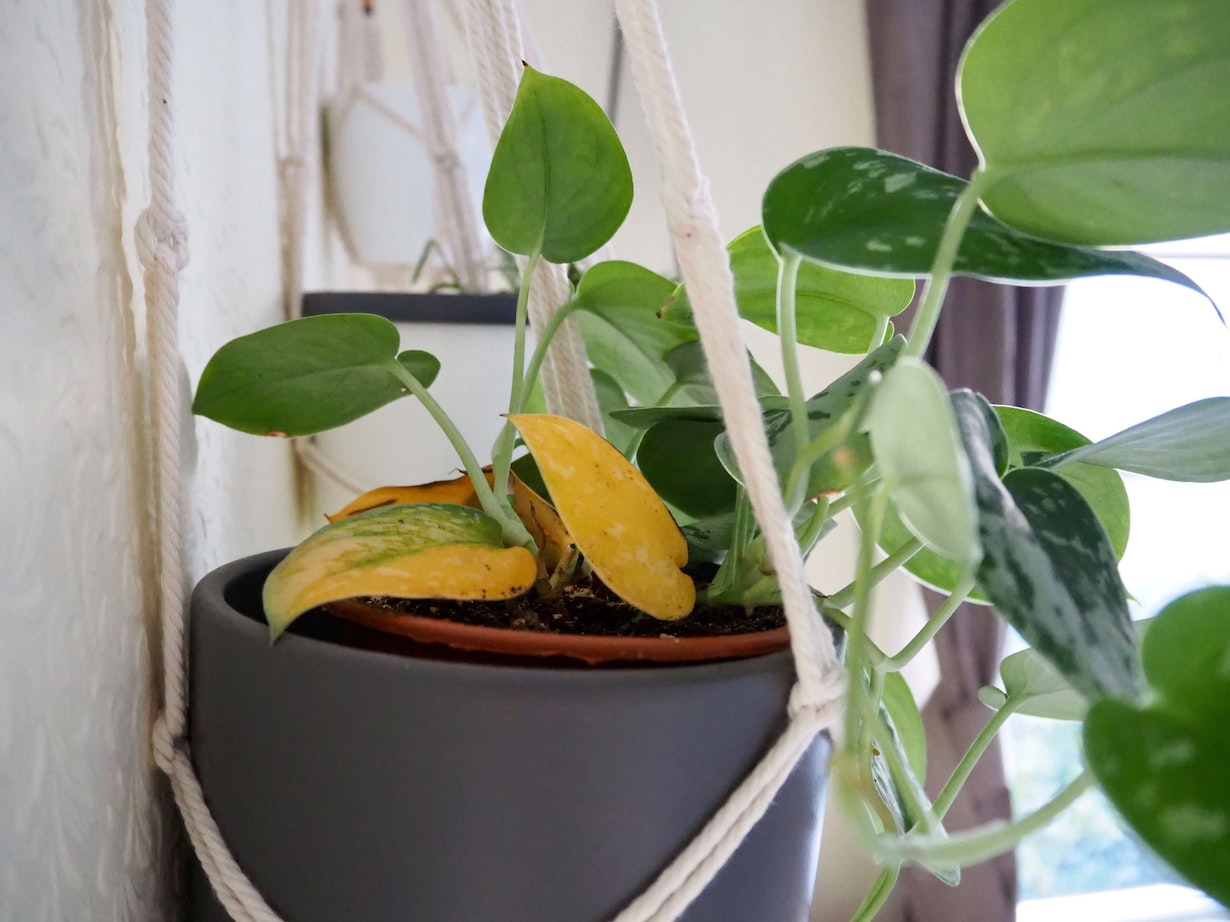 The other main culprit aside from overwatering is often to do with temperature; check to see if the plant has been near a cold draught, this can be a cold or open window, a/c unit or a fan. Be mindful of this as we head into cooler temperatures in the UK… open windows and draughts in close proximity to plants can have a surprising effect. I learned this the hard way a few years ago with one of my Ficus Elastica Tinekes! 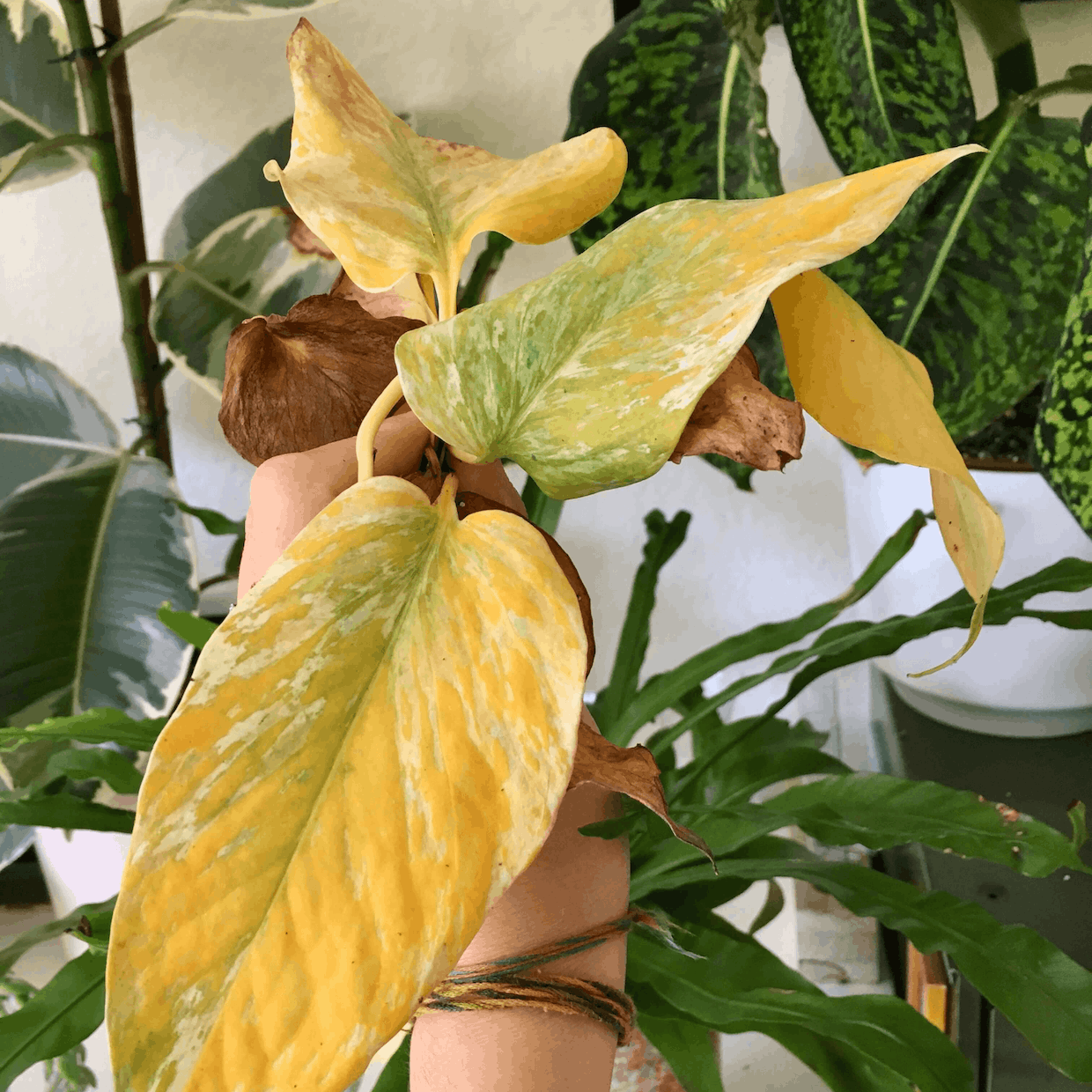 There are a few other options that are worth mentioning…too much bright light can create either pale or yellow leaves that tend to look a bit wilted. You might need to move your plants around seasonally to avoid this, it does sometimes take a while to work out the best location. More light doesn’t always equal a happy plant.

If the yellow leaves are looking curled up or damaged in other ways, it could be the result of red spider mites, aphids or scale insects, which basically suck the sap from the plants, leaving them dull and lacklustre.

Less likely to be an issue with houseplants but worth a mention is that there could be a build up of lime in the compost, which can be exacerbated if you live in an area where there is hard water; this is called chlorosis.

If you have a leafy houseplant that has decided to flower, you might be pleasantly surprised! But despite looking nice, plant infloresence will be zapping energy from the foliage which could subsequently result in yellowing leaves. This happened recently to me and my Aglaonema ‘maria’ (see below).  I decided to leave the first two flowers bloom, but cut the other two before blooming…it seems a bit mean I know, but think about the leaves, which is what the plant is grown for (unless it is a flowering plant obviously!) 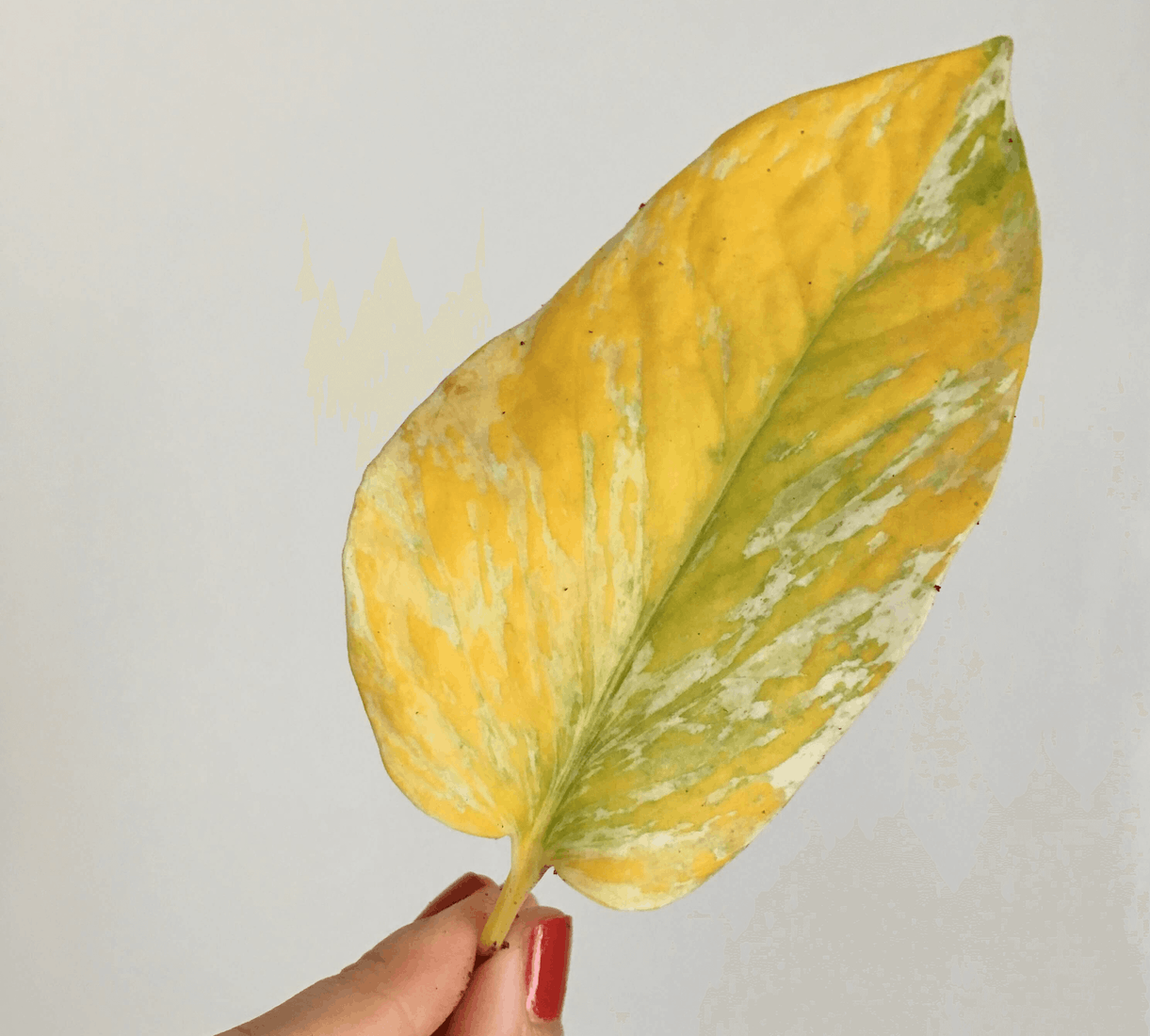 Finally, check to see if repotting is needed – if the plant is root-bound or stressed in some way, watering and feeding will be a lot less effective, so the plant might be gradually getting weaker, which can sometimes present itself via leaves not growing well or yellowing.

To summarise, the main causes of leaf yellowing are:

Hope this post was helpful to offer some general considerations if you are having trouble with yellowing leaves, it’s often a process of elimination to determine the possible cause/s, so don’t be disheartened (your plants will thank you for it too)!

Thanks for reading, Laura